Silverstone 79: The Race Of All Races 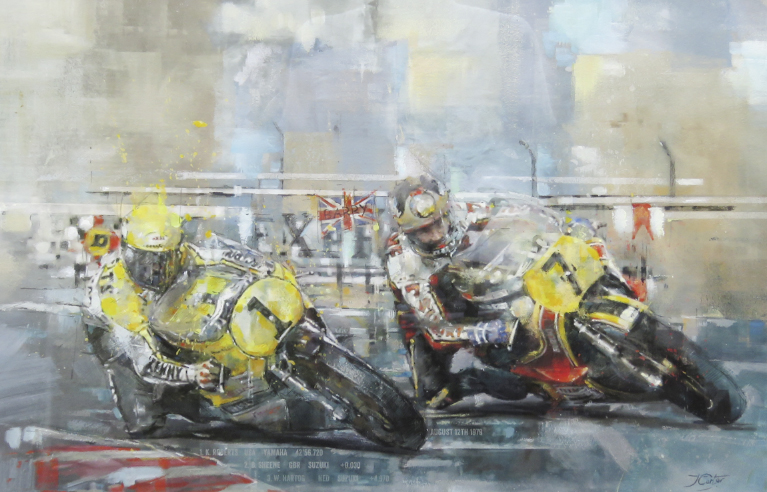 ‘Silverstone 79: The Race Of All Races’

To celebrate Barry Sheene’s 40th anniversary since winning the 1976 and 1977 500cc Motorcycle World Championships, Stephanie, Barry’s wife, and Freddie, Barry’s son decided to commission a leading motorsport artist to create a one off, bespoke collection to celebrate these two historical milestones.

After reviewing over 15 potential artists, the Sheene family decided to commission world renowned motorsport artist Jonathan Carter to create an eight-piece Barry Sheene collection. Over the course of 2016 and the start of 2017 the family worked closely with Joff to initially identify the eight pieces that would form the collection.

Over a nine-month period Jonathan created the bespoke collection with regular input from the family. The collection was finished in May 2017. The frames of all eight paintings have been signed by Freddie Sheene to ensure authenticity.

This picture shows Barry and Kenny Roberts side by side at the 1979 British GP at Silverstone. The Silverstone meeting became one of the most talked about races in history. The pair went head-to-head in a breathtaking battle over 28 laps, famously exchanging gestures and hand signals throughout the race before a final corner dash to the line which saw Roberts take the win by just 0.3 seconds.